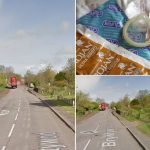 Police say they are determined to put an end to the practice, where strangers meet and have sex with each other at the otherwise picturesque woods near Swansea.

Another resident, who wished to remain anonymous, said: “It’s not so bad in the day time, but loads of them come at night.

I know truckers who drive along here have seen things they shouldn’t have to see.

“The police are coming back and forth more often now, though, and moving them on.”