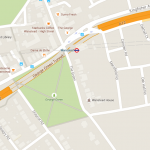 The pair were caught at 7.30pm on Wednesday night, with police ordering them out of the area.

Councillor Colin B Cronin said he called officers after seeing the pair “going at it full pelt”, in sight of surrounding roads and bus stops.

The sounds of sex” were “audible”, he told the London Evening Standard.

“The guy had his trousers around his ankles and the lady was underneath him,” said Cllr Colin Cronin. “When she stood up she had to hop around to put her trousers on.”

“It’s a park that’s frequented by families and children,” he said. “It’s not in any way secluded – a main arterial route runs through it and it’s adjacent to Wanstead Tube station.”

“Police walked up to the woman and she stood up with no knickers on and her cleavage hanging out,” she told the Wanstead and Woodford Guardian.

“They must have been under the influence of alcohol or drugs but even so it was just unbelievable to see, with all the sound effects to go with it.

“I can’t believe they didn’t do more than tell them to leave.”

The couple reportedly continued to have sex after officers told them to leave.

“It wasn’t just a bit of petting, he was on top of her going at it full pelt while the shop keepers whistled and cheered them on,” Councillor Cronin said.

“When the police walked over, the lady had to stand up to put her jeans back on.”

He questioned why police had not arrested the couple.

Met spokeswoman declined to comment on the alleged police inaction, saying the investigation had not been completed.

Wanstead Park is known to be hot for wife swapping and interaction.

A police spokeswoman said: “Police were called to George Green, Wanstead, on Tuesday at about 7.20pm to reports of couple engaged in sexual activity.

“Officers spoke to the man and woman at the scene and they were asked to leave the area.

“Officers remained in the area for a time afterwards and conducted patrols. The local policing team is aware of the incident and will be making further enquiries and speaking to local people.”