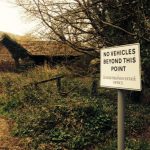 Land near Bolham has been advertised on several websites as one of the best places to engage in the practice of watching strangers have sex in public places.

Because it is close to the M5 motorway and the A361 North Devon Link Road, and has space for car parking, the site has been “over-run” in recent weeks, said one woman who exercised her dogs there.

“It used to be a bit of a problem on some nights of the week, and I didn’t feel safe there after dark,” she said.

“Now it happens in broad daylight, even in the mornings. It used to be such a nice place to come, as there is a nice path down by the river, but increasingly I find myself driving further afield to places where I won’t feel so threatened.”

The site is described on one site as being an excellent place to meet for sex with strangers because of its transport links and the fact that there are ramshackle farm buildings and hedges for privacy.

The land is part of the Knighthayes Estate. No one was available for comment at this point

Article reproduced thanks to http://www.exeterexpressandecho.co.uk/Concern-Mid-Devon-beauty-spot-8216-run-8217/story-20793126-detail/story.html#ixzz2wlzAnaSm